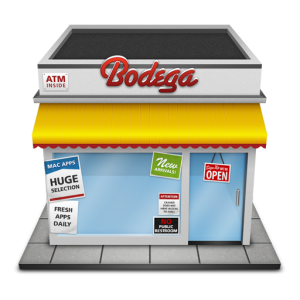 Let’s get one thing out of the way first thing: I’m a big fan of Bodega and have been since I heard about it firsthand from the guys at centrix.ca during WWDC 2009.

Bodega is a free Mac application that helps you discover and download Mac applications. It is built in the spirit of great software sites like MacUpdate, but takes the experience and puts a great looking Cocoa wrapper around it. Make no mistake, this project is a big undertaking with a lot of moving parts and a lot of coordination between those parts. Yet with steady progress and determination these guys are really crafting something cool.

The impetus for this particular blog post is to gush about what I think is Bodega’s killer feature: keeping track of and installing updates for the applications installed on your computer. I really like Andy Matuschack’s Sparkle framework, but one of the necessary evils of that framework is that it doesn’t notify you that there is an update for a particular app until you run that app. When I launch an application it is done with the intention of performing a task immediately, but if there’s an update for that particular app I am yanked out of my workflow to deal with the question of updating the app first. Yes, I can continue to work, but in the back of my mind I’m thinking about how I don’t have the latest version of the software that I am currently using, and it bugs me.

Enter Bodega. Once every few weeks I will launch Bodega and click on the Applications section in its sidebar which presents me with a list of all the software currently installed on my system*. The killer feature is that Bodega scans all of the Sparkle feeds in these apps and will tell me if there’s an update for any of them. With two clicks (one to download and one to install) I can download and install any of the updates that I want. This simple process greatly reduces the chance that the next time I launch an app I will be presented with the option to download and install an update, Bodega has already taken care of it for me. 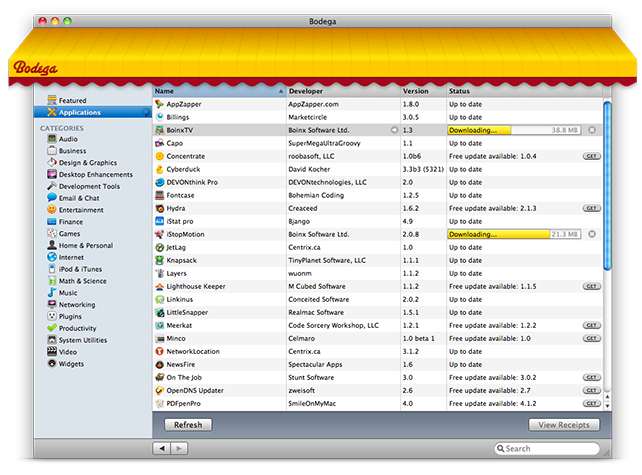